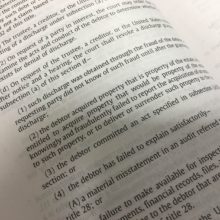 Bankruptcy relief is pretty extraordinary, when you think about it.  You can file a case that, if properly done, terminates your obligation to pay debts.  You can strip off mortgages.  Judgments (not recorded against real property) are voided.  A bankruptcy discharge is an extraordinary measure of relief, and really does give a debtor a fresh start.  Sometimes, though, bankruptcy cases don’t end at the discharge, and that’s the case when you come into certain kinds of property after the end of your case.If you do come into some of these kinds of property, like an inheritance, know that it belongs to your bankruptcy estate, and that you have a duty to report it and turn it over. If not, you could be jeopardizing your discharge, which is not good.

This case comes out of the bankruptcy court for the Northern District of Illinois.  In this case, the debtor, who was a CPA, college lecturer, and a fraud auditor, had filed a chapter 7 case on September 21, 2011.  The case was administered, and a discharge order was entered on December 20, 2011.  Unfortunately, the debtor’s uncle passed away on December 17, 2011.  The uncle had died without any other known relatives except the debtor and her two siblings.  The uncle’s assets were liquidated over some time and, as a result of the administration of the uncle’s estate, the debtor received a total of $53,242.06.

In January 2012, the debtor had notified her bankruptcy attorney that her uncle had passed.  The attorney responded with a letter advising her that any assets received from the estate are part of her bankruptcy estate, and must be reported and possibly turned over.  The trustee learned of the sale of a condo of the deceased uncle in October 2012.  Between January 2012 and October 2012 was when the debtor received all the funds from her deceased uncle’s estate.  Thereafter, the trustee reached out to the debtor’s bankruptcy lawyer and, subsequently, the debtor.  While the trustee kept demanding an accounting and turnover of the funds, the debtor kept responding that she believed an actual will existed, and that she does not believe that the monies she received belongs to her. This went on and on for several years, after which the trustee sued the debtor to revoke her discharge.  In its analysis, the court looked at the debtor’s behavior over the three years that the trustee was seeking turnover of the funds.  The debtor had not reported one account, and only disclosed assets she received after the trustee identified them.  The court also took into account that the debtor is a CPA and a sophisticated professional with significant financial expertise, and that her behavior was knowing and with an intent to defraud.  Steege v. Johnsson, 14-106 (In re Johnsson, 11-38307-TAB) (Bankr. N. D. Ill., June 2016).

As mentioned earlier, bankruptcy relief is an extraordinary measure, but it also comes with responsibilities.  Debtors have an ongoing duty to report assets that may be part of the estate, even after the discharge is entered.  Debtors cannot play fast and loose, and the worst thing one can do is try to hide property.  In this case, it cost the debtor her discharge, so she’s liable for all of the debts she thought she discharged in 2011.