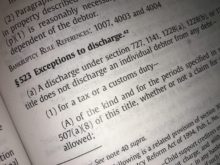 In this case, the debtor did not file his 2001 tax returns.  Thereafter, after notices to the debtor received no response, the IRS generated an SFR (substitute for return) as it normally does for people who don’t file returns.  The IRS then mailed out its normal set of delinquency notices and demands to the debtor.  Seven years after the tax return was due, the debtor filed a tax return for 2001.  Then the debtor entered into an installment agreement with the IRS to pay off his delinquency in monthly payments.  Unfortunately, the debtor lost his job, and then filed for bankruptcy.

Ultimately, the court found that it was NOT an honest and reasonable attempt to satisfy the tax law.  The court found that the debtor’s ultra-late filing (especially after the IRS went through the trouble of calculating his liability and trying to collect) was a “belated acceptance of responsibility” and not a reasonable and honest attempt at compliance.  Essentially, the court reasoned that the debtor didn’t file anything concerning that tax year until he absolutely had to and when it was in his best interest.  Further, the IRS spent years trying to communicate with the debtor, and he never responded.  The court, however, declined to extend its opinion to state that ANY late-filed return can ever constitute a tax return (thankfully!).  In re Smith (9th Cir., July 2016).

Ultimately, the takeaway is that you should timely file your tax returns.  Even if there is a liability for a tax year, you could deal with that liability directly with the IRS, or seek to have it discharged in bankruptcy.  These late-filed return cases are usually riddled with bad facts, and the courts are shrinking back the kinds of tax liabilities that may be discharged in bankruptcy.